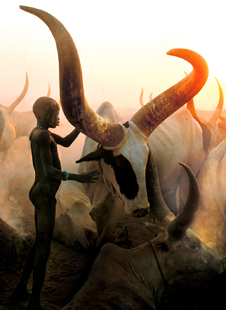 Carol Beckwith is an American author and photographer known for her photojournalism, partnered with Australian photographer Angela Fisher, documenting indigenous African tribes. Together they have published fourteen books and films. Their photography has also featured in Time, Life, Marie Claire, Elle and National Geographic magazines. The Beckwith-Fisher images have been captured through many journeys and deep relationships which they have formed with various tribal groups.
Sadly the traditional African cultures are disappearing quickly, therefore this duo are working hard to get their third volume of African ceremonies ready for publication in 2013. They still have thirteen African cultures to cover and the book is entitled, “African Twilight.”

“Beckwith and Fisher have done more than anyone to awaken the world’s appreciation of everything African, from adornment to the rapidly vanishing ceremonies”.
— Peter Keller, PhD, President of the Bowers Museum, Santa Ana, California