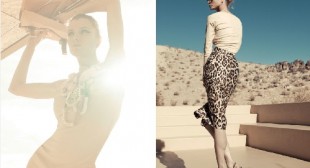 Photographer/ Cinematographer / Director Michele Laurita began her career over a decade ago shooting for musical artists shooting album covers. Starting as a child actor, she promptly started to document the cast members around her with a second hand still & movie camera and a new career started. Her style has attracted a broad range or artists, actors, musicians, directors, writers and designers. Most recently her work will be featured in the upcoming DOLCE & GABBANA Anniversary book and adding the latest Target with GWEN STEFANI, Woman’s FRUIT OF THE LOOM Campaign. House of ALOXXI and directed the commercial for the campaign, HALIBURTON LUGGAGE, Neutrogena / CLEAR with MARIA Sharapova. Other artist’s recently include Adrien Brody, Boardwalk Empire’s, Charlie Cox, Ben Affleck, Ice Cube, Selma Hayek, Jessica Biel, Mark Wahlberg, Terrence Howard and Nicholas Cage. Her unique strength is in her ability to create intimate and honest portraiture and fashion images in a mellow and collaborative environment. Her perspective in shooting is driven by her background and eye for directing.