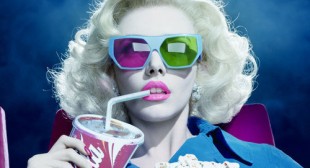 Born in London, Aldridge studied illustration at Central St Martins, and briefly directed pop videos before moving into fashion photography in the mid 90s. His influences include film directors Derek Jarman, David Lynch and Fellini and the photographer Richard Avedon and the psychedelic graphic design of his father, Alan Aldridge. His work is highly controlled with a cinematic effect.
His work is filled with glamorous, beautiful women, whose perfect appearance and blank expression could be interpreted as passivity and ambivalence. Aldridge, however, prefers to define his women as in a state of contemplation, so that we are asked imagine their inner lives. And the technicolour dream-like worlds he creates aren’t as perfect as they seem. There is silent screaming, broken glass, a head pushed down on a bed, the blood red of ketchup against a black and white floor. It’s a dream that could just as easily turn into a nightmare.