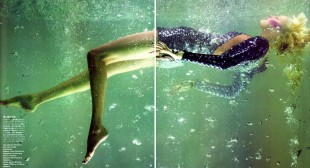 Sølve Sundsbø was born and raised in Norway and has lived in London since 1995. He has had catalogues published in conjunction with his “Perroquets” exhibition and “Savage Beauty”, the Alexander McQueen retrospective at The Metropolitan Museum of Art in New York. He has also created artwork for several album covers, most notably Coldplay’s, A Rush of Blood to the Head. He is one of the great innovators in contemporary image-making.