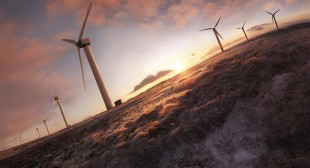 Even on sunny days, a rarity in Manchester, England, photographer, digital artist and film-maker Andrew Brooks spends hours in a darkened studio striving to show us the bigger picture.

Weeks, months, sometimes years pass by as he re-touches picture after picture, to create the perfect moment for us, the viewer, to fall headlong into.

In recent years his vision has flourished and evolved into large panoramic scenes of nature and forensically detailed cityscapes.

This gives his work a timeless and fantastical appeal capturing the imagination of the public and landing high-profile international projects such as the Hidden City Series and commissions by the BBC.

In his work with the Hidden projects he explores the unseen sides of cities to create images that make citizens, city planners, councils, captains of industry and magazine editors see their home with fresh eyes.

In his picture ‘Angelic View’ (Top of Town Hall, Manchester) he gave the usual gull-grey working class city a visual make-over so exciting it looked like a scene out of Tim Burton’s Batman film.

Brooks’ latest work with the BBC investigates the power and awe in nature. His early experiences growing up in the Fens countryside established the foundation of this view and he cites artists from the Romantic era as re-igniting this lifelong passion (BBC Philharmonic Concert Series 2011-12).