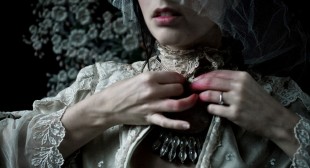 Kirsty Mitchell (1976) is a fine art photographer and fashion designer based in the UK. Following the tragic loss of her mother, Kirsty turned to photography to help deal with her grief and embarked on her now revered three year series entitled ‘Wonderland’, created in her mother’s memory – inspired by the fairy tales her mother read to her as a child. The international acclaim for her work led Kirsty to leave her fashion career in 2011 and pursue her future as a fine art photographer. Kirsty’s belief in beauty and fascination with folklore has become the root of her inspiration, with work that has led her to be described as a multi-faceted artist with talents and artistic direction that combine to produce beguiling, dream like images – which Kirsty calls ‘fantasy for real’.