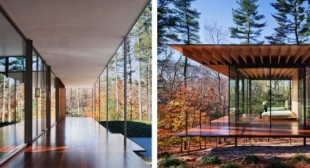 Scott Frances was born to a New York city home filled with mid-century furniture, two older brothers and a lot of art on the walls and books on the shelves. His father was a creative director at an advertising agency, and his mother was an editor for decorating magazines. Therefore it is evident he had a very creative background. In Scott Frances’ childhood, he was mostly drawing and painting, often trying to copy Picasso’s. After completing his studies in journalism and art history at Northwestern University, he returned to NYC to work under the auspices of the legendary architectural photographer Ezra Stoller. It was during this time that he began to document the work of the great American modernist architect Richard Meier, a collaboration that spans three decades.

Scott Frances’ subject matter has always been rooted in architecture and the decorative arts, but as his work has evolved he incorporated people and animals into his images. He became more interested in the atmosphere of the spaces, certainly in their volume and quality of the available light, but also the touch, sound and smell, the mood. Frances never supplements the lighting, instead he shoots multiple exposures, and in photoshop he layers these exposures together to render an image that best captures the sensory experiences of being in the environment. The compositions and narrative themes in his work speaks to recurrent threads found throughout art history.